Everyone loves Flo. She’s helpful, quirky and infectious. She presents a likable human quality for Progressive, the insurance giant she represents. But Progressive’s famous branding recently took a major hit during a social media battle about its role in a fatal automobile crash.

Responding in a spam-like manner on Twitter compromised Progressive’s sense of empathy. Progressive joined a bandwagon of brands that are struggling to identify themselves as human in the social media world. 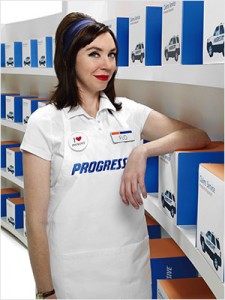 Show Your Good (Human) Side

Step out of the shadow of your smiling spokeswoman. The public doesn’t want to hear from an imaginary person with no accountability. They want the words to come from someone at the top who matters. Progressive fed a repetitive canned response with the face of Flo that came off as cheeky and insincere.

Take a lead from FedEx, which presented us with a better alternative. The shipping company’s senior vice president of operations responded to a package-handling mishap with a public video apology and promise. Their reaction was humble and apologetic and promised resolution. You can read more about FedEx’s response here.

2. If you aren’t sure of the details, just let the public know you’re working on it. Acknowledging that you are aware can keep your human image intact. When our friends insult us, sometimes we just want them to admit they’ve messed up.

The University of Southern Mississippi followed this tactic when they responded to a student’s insulting remarks towards players during a basketball game. They reacted quickly on Twitter to acknowledge the incident. Then, they followed up later in more detail when they had a plan of disciplinary action. You can read more about their reaction here.

Don’t reach out only when there is something wrong. While your social media efforts are handy when reacting to a crisis, your brand shouldn’t be like that friend who only calls when they need to vent. Scania Group, the Swedish truck and bus manufacturer, uses its social media platforms to connect with visitors on environmental issues and new technologies. They converse with followers on a daily basis about good times and bad.

People don’t necessarily trust businesses; they trust the faces behind the scenes making that business work. Engage with your customers or followers on social media the way you would with your friends and family. You’ll show a personable side to your brand that people will find relatable. It’s that relatable, human quality that sells, not the business jargon or automated replies.

is president of Schubert Communications. Starting at Schubert in 1994, Rich now heads the agency in creating effective IMC campaigns, PR campaigns, advertising, brochures, direct mail, logos, websites, multimedia and content. Rich holds a Bachelor of Arts degree in design from American University. When Rich is not in the office he enjoys spending time with his wife and children and is a huge history buff.